Rogue Heroes takes its art style and gameplay from The Legend of Zelda, specifically A Link to the Past. Anyone who has played a traditional Legend of Zelda game will immediately be familiar with the controls and actions available.  The design contains many of the staples seen in the Zelda series including a top-down camera, multi-height environments, and slashable grass.  The dungeon are filled with bombable walls, silver keys, chests hidden by puzzles and, of course, breakable pots.

But this isn’t just a Zelda clone.  The differences are substantial but are not obvious in the beginning.  It’s not until entering a dungeon the second time that the additions to the Zelda formula start to appear.  I say second time here because the first time (and likely many other times) will probably end with a revival back in town after the hero’s hearts are drained. Every time the dungeon is entered, the game randomly generates each floor using a large pool of set pieces.   This reminded me of the Chamber Dungeons in the Switch version of Link’s Awakening.

Another major difference is that special items like the boomerang and the hookshot are not confined within a specific dungeon.  These items can be found in any dungeon as a treasure drop and their strength is determined by their material, the weakest being made of glass which disappears upon death.  The items, however, are not limitless as their usage requires mana.  This forces players to weigh their options as the mana dwindles and helps prevent the hero from being over powered. 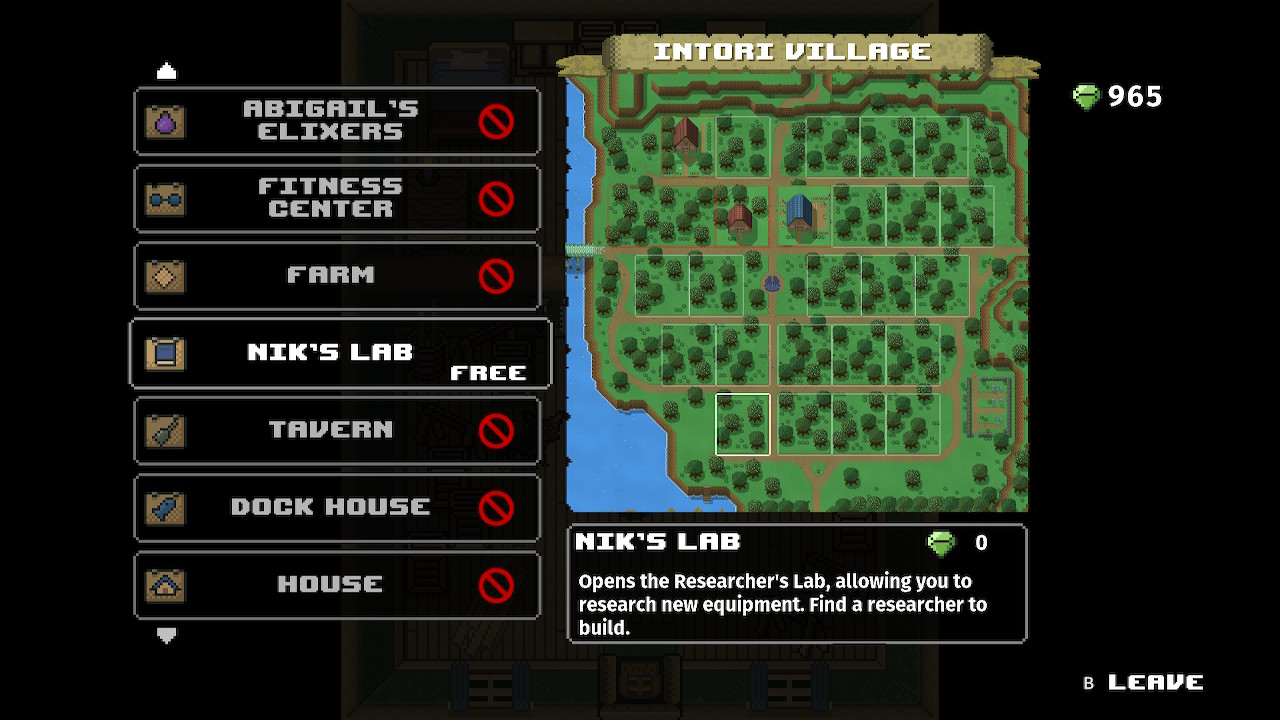 The randomly generated dungeons are not the only innovation here; Rogue Heroes also contains a city (village?) building mini-game.  The protagonist starts in a simple little house near a blacksmith.  The rest of the space is open to build in any configuration desired.  Each dungeon run is an opportunity to collect gems which are literally everywhere: item drops, inside chests and pots and literally falling from the sky.  When returning to the village, the gems can be given to the blacksmith who will build new buildings and enhancements.  The village has more than 20 lots available for buildings, each one providing assistance in the form of items or buffs for the next dungeon run.

Although my time with Rogue Heroes: Ruins of Tasos was brief, I loved almost every second of it.  Sadly, there was a bug in one of the dungeon rooms that caused me to restart the game and lose a chunk of progress, but even with that tiny blip, Rogue Heroes was extremely enjoyable.  Every time I fell in a dungeon, I was ready to go back in and try it one more time.  I was concerned that dungeons might feel too similar since the dungeons were generated from a specific set of rooms, but there was always something new when I entered the dungeon.  Sometimes it was a completely new room with a puzzle I hadn’t seen before or the rooms had different creatures.  The dungeons were tough, but not in a way that felt cheap.  Every time I lost a heart, it was because of my own ineptitude and there was usually more hearts lying around in the next room. The village building aspect of the game helped to make the eventual resurrection of my hero seem fruitful.  It was a way to see progress as I warped to the dungeon for the twentieth time.  When my time with the game was over, there was a huge longing to jump back in.  Rogue Heroes: Ruins of Tasos is a natural evolution to the top-down 2D action adventure, and it provides a fulfilling experience that has been missing from the current video game scene for a little while.